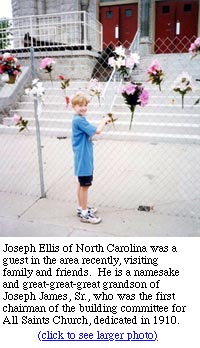 The flowers on the fence at All Saints Church were inspired by a letter to the editor. The letter was written from a child's perspective. An innocent child who saw the majesty of the building.

Many, many bouquets were placed on the fence in the ensuing days and continued to be placed there. And then, the flowers were vandalized for inexplicable reasons known only to those who removed them.

Eventually, our parish priest decided that there was no harm in placing flowers on a fence, and declared so at weekend services in May. Now - today - the flowers have been stolen again.

This action brings back memories of the stories I was told of the Ku Klux Klan parading down our main street and holding hate-filled rallies at the pond east of town. Their only targets in this area were the Catholics.

This small town vanquished their obnoxious assault. But the threats and intimidations are not forgotten, nor should they be. How can it be, some seventy years later, Catholics turn against Catholics, and shame their ancestors and denigrate their hard-won freedom from persecution and prejudice?

I am absolutely confounded by this latest example of boorish behavior.

Mary Jo Ellis received this anonymous letter on Thursday July 18, 1997 after her letter to the editor came out on Wednesday July 16, 1997.

WAS IT REALLY THEM?

Back to "Letters to the Editor" Menu