PROJECT RESTORE: All Saints Church, Stuart Iowa
| Home | Letters to the Editor | Newspaper Articles |
| Pictures | How to Help | E-Mail Us | 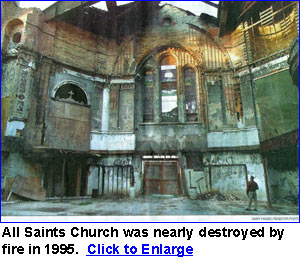 Church returns from the ashes

Step by step, preservation of All Saints continues

Exposed steel beams of the burned-out All Saints church building are still visible from the outskirts of town. Faded plywood covers openings that once held stained-glass windows. Pigeons fly in and out of the charred stone shell, and a smoke smell seems to linger when the wind is right.

But Richard Doherty walks through a side door and into a new world. There is a fresh coat of paint in a small chapel at the back of the old church. Sun shines through stained-glass windows. Refurbished gold lamps hang from the walls. "I think maybe we can get people's attention now," Doherty says.

A group calling itself Project Restore has owned this damaged but historic building since 1999. They have tidied the grounds outside and cleared the basement of debris. The refurbished turn-of-the-century chapel is the most visible progress the group has made. The walls and 14-foot ceiling have been smoothed and painted. A marble altar awaits unpacking. Doherty says the group hopes to open the 75-seat chapel for weddings and other activities by Christmas.

Project Restore's goal is to renovate the entire landmark building and transform it into a community cultural center and an institute for religious tolerance. Doherty, the group's president, estimated $3.5 million would be needed to complete the project as planned. So far, he says, the group has received at least $300,000 in grants and donations.

"We were pretty realistic about everything," Doherty says. "We weren't expecting to get this building and all the money would be there. And we never expected to raise the money locally." The 1908 church, known for its rare Byzantine-style architecture, was nearly destroyed in 1995. A Des Moines man with a grudge against the Catholic Church wheeled gasoline into the church with a cart and lit a match.

Church members were divided over saving the old building or building a new one. Those pushing for a new church eventually won. The new All Saints Catholic Church stands on the east edge of town. Those who fought to rebuild bought the old church from the Diocese of Des Moines in 1999. Since then, the building has been placed on the National Registry of Historic Places. It is an official project of Save America's Treasures, a federal program. The state also has chipped in, including a recent $10,000 American Spirit Grant created in response to the Sept. 11 attacks. Most contributions have been smaller.

Supporters have agreed to sponsor the refurbishing of soot-covered lamps that will light the chapel. A Florida doctor donated money to repaint a statue of Jesus. Others have put a dollar or two into the black metal donation boxes attached to the chain-link fence surrounding the church. Local preservationists hope Project Restore succeeds. Efforts are under way to restore the Stuart train depot and make the downtown a historic district. 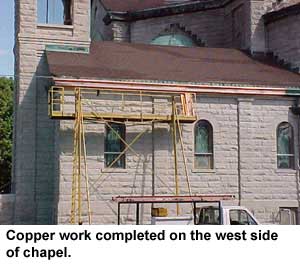 "We're looking at historic preservation here - to preserve what we have and make it better," says Winnifred Gaskill, a newly elected city councilwoman. All Saints "will be part of the overall picture."

Doherty finishes the tour of the chapel and walks through a back door. It opens to a narrow, curved walkway behind what once was the ornate altar. Small windows covered with plastic offer a view inside the building's shell. It still looks like a scene from World War II Europe.

Doherty says he doesn't mind people asking how long it will take to realize the dream of a community center, with multi-media displays, a virtual library and a gloriously restored dome. "When I'm asked that question, I tell them this: When I get the money," he says. "Small steps. That's how we're doing it. In steps."