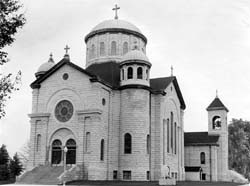 More than a dozen historic buildings across Iowa are being threatened by neglect and demolition, according to a report to be released this week by the Iowa Historic Preservation Alliance.

In its annual list of the state's most "endangered properties," the Mount Pleasant nonprofit organization calls on Iowans to remember -- and protect -- their state's rich history.

"Our historic buildings are our cultural heritage," said the alliance's president, Cooper Norman. "Every time we lose a historic building or see one in decay, it has an impact on our lives."

Landmark buildings on the endangered list come from all corners of the state and include hotels, private mansions, barns and even Native American burial grounds.

The listed buildings include the Klinefelter Livery Stable in Waterloo, which was completed in 1907 and was the last stable built in Waterloo before the automobile. The Klinefelter, one of the last remaining livery stables in Iowa, is a two-story brick building that was the city's first multi-level parking ramp for horses.

The Dixon Site, in western Iowa's rural Anthon, is an archeological site holding the well-preserved remains of a large and vibrant village of the Oneota culture. Erosion from the Little Sioux River has exposed the Native American burial site.

Also on the list is the Wickfield Sales Pavilion in Cantril, described as a "beautiful round barn," built in 1918, with a dormer roof, historic sales arena and dance floor. The building is rapidly deteriorating with large pieces of the roof missing.

Another endangered property is the Warrior Hotel, a grand 1930, 10-story, art deco brick building that fills a quarter-block in Sioux City. Though it was placed on the National Registry in 1985, the owners have been unable to finance the hotel's restoration.

Norman said restoration of these historic buildings can revive a community's economy. He used the Hotel Pattee in Perry as an example. After a $10-million renovation of the 84-year old building, it has been called one of the finest small hotels in the Midwest.