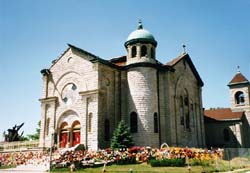 Historic and culturally-significant buildings across Iowa are being threatened by neglect and demolition, according to the Iowa Historic Preservation Alliance (IHPA).

In its third annual release of its List of Endangered Properties, the IHPA hopes to call attention to some key significantly-threatened properties and to all historic buildings to remind Iowans of the economic and cultural impact of these structures.

This year's list of endangered properties includes All Saints Catholic Church in Stuart.

The Byzantine-style church was built between 1908 and 1910 and was gutted by an arsonists' fire in 1995. The Des Moines Diocese opted to build a new building on the outskirts of town and have received bids for demolition, rather than attempt rehabilitation, the IHPA noted. A local group formed Project Restore to save the building and has stalled demolition, but has been unable to gain title of the structure. Weather continues to ravage this viable structure, the IHPA reported.