TRYING TO RESTORE A BEAUTIFUL LANDMARK 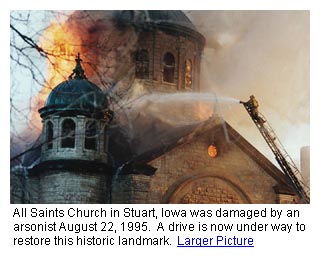 "What God has joined together, let no man put it under." These are the words some use when joining a couple in marriage. However, the same message can be used when discussing the future of the All Saints Church in Stuart.

This beautiful landmark has its beginning in 1908 when the founding fathers of this parish had the foresight to build this magnificent house of worship. Designed after St. Mark's in Venice, Italy, the All Saints Church was a beacon to the community and all who traveled near it. In years gone by travelers on Highway 6 passed within three blocks of the church and many stopped to view this majestic house of worship. It called not only to the Catholics who were members of the parish; it called to all denominations in the community and passers-by. Until 1995, this jewel shined as a glimmering light to those who were traveling just one mile south on Interstate 80.

All Saints Church is one of only a few Byzantine-style churches of this magnitude in the United States. The stones are hand-carved limestone and the delicate stained glass windows hold precious memories for many.

On August 22, 1995, Charles Willard, then of Des Moines, horrified people of all faiths when this hate-filled arsonist set the beautiful All Saints Catholic Church in Stuart afire. His actions "took the heart and soul out of a small community" and to "celebrate his 60th birthday," Willard found a way to find his fifteen minutes of infamy. Willard gave many reasons for setting the fire, which ranged from homosexual reasons, to the beginning of the end of Christianity. No matter what this sick person's reasons, he has done damage to far more than just a structure. He has made the hearts and souls bleed in Stuart, Central Iowa and the world.

God gave the founding fathers the ability to join together the limestone, stained glass and marble and no man like Charles Willard should be able to put it under.

Today, the Des Moines Catholic Diocese has abandoned the damaged All Saints Church. The parish has purchased a new sight and started construction of a new Catholic Church. However, this damaged landmark should not be destroyed even though Willard had hoped it would be. Hundreds of thousands of people in Iowa and around the world have heard of this devastation. This story is to remind everyone that the "Project Restore Foundation" still exists, and is gaining speed to restore the church and use it as an Institute of Religious Tolerance for weddings and funerals in addition to other religious educational and fundamental experiences.

To help prompt the Des Moines Diocese to release the property to the "Project Restore Foundation," e-mail Bishop Joseph Charron and Msgr. Stephen Orr at CathDioDM@aol.com. If you prefer to call the number is (515) 243-7653. You may send mail to the Des Moines Diocese, at 601 Grand Ave, Des Moines, IA 50309. Ask them to save the remains and release this property to the "Project Restore Foundation" so they can protect the legacy left by this community's founding fathers. Let them know the walls should stand erect, not be demolished and ground-up to be used as a driveway.

A few have said the church should be completely destroyed. Many more are asking for it to be restored. Where would our White House be had it not been restored after the devastating fire there? What would Charleston, South Carolina look like, had they destroyed the 100-year-old homes instead of investing their time and money to restore those shattered buildings? History and heritage is not something that should be destroyed and every person in the world should do what they can to help preserve what earlier generations left for us to protect.

If you wish to make a monetary contribution to the Project Restore Foundation, two accounts have been established to support the efforts to restore All Saints Church. Please send your tax-deductible contributions to the "Project Restore Foundation Fund" (c/o First State Bank, Stuart, IA 50250 USA.) This is a fail-safe account to which contributions and pledges of money and in-kind services may be made. If, ultimately they do not restore, all contributions will be returned. The second account is "Project Restore Foundation Operation Account" set up at the same address. This account is set up as the source to cover expenses in their efforts to ensure the decision is made to restore. Cost includes postage, copying, advertising and other legitimate and justifiable cost towards the effort to encourage a decision to restore the beautiful All Saints Church.

If you need additional information about the Project Restore Foundation, visit their web site at http://www.restoreallsaints.org.

Thousands of words have spilled over the pages of newspapers and across the airwaves regarding the fire at All Saints Church in Stuart. However, the feeling about this jewel in Western Iowa was best summed up by Chuck Newton in a Letter to the Editor in the Stuart Herald on August 31, 1995.

"Black smoke belched from windows and doors when I arrived at the fire in the late afternoon. A friend of years looked at me through doleful eyes and asked, 'Chuck, can you perform miracles? No,' I said. 'If I could I would.' But perhaps we can perform a miracle, you and I, the people of this community, by insisting on nothing less than total restoration."